[This is a copy of my blogpost, previously on thespectroscope.com.]


I just stumbled into the twitter account of the House of Representatives Committee on Science, Space, and Technology. This is the Committee with jurisdiction over NASA, NSF, EPA, NOAA and many other agencies. I realize that the Chair is Lamar Smith, a famous climate-change denier. I know that he has been abusing the Committee to harass scientists with subpoenas. I know that AAAS and several other science societies just sent a letter to Smith warning that the actions of his committee "threaten to inhibit the free exchange of ideas across scientific disciplines not only for NOAA, but for other government experts and the academic and industry scientists with whom they collaborate."
I know all of the above, and yet I was stunned to see the twitter feed of this Committee. The chair is a Republican, but this is supposed to be a bipartisan Committee acting in the interests of science and technology. As is, I wonder if their Twitter account has been outsourced to someone from FoxNews.
A quick search shows 12 tweets from FoxNews. What about from the New York Times? Just 1, critical of the EPA.
And if we search the Committee's tweets on "NSF", instead of highlighting amazing discoveries, we get mocking such as:

Chairman @LamarSmithTX21: #Congress should not reward #NSF's frivolous use of taxpayer money with even more money. http://ow.ly/xojf5 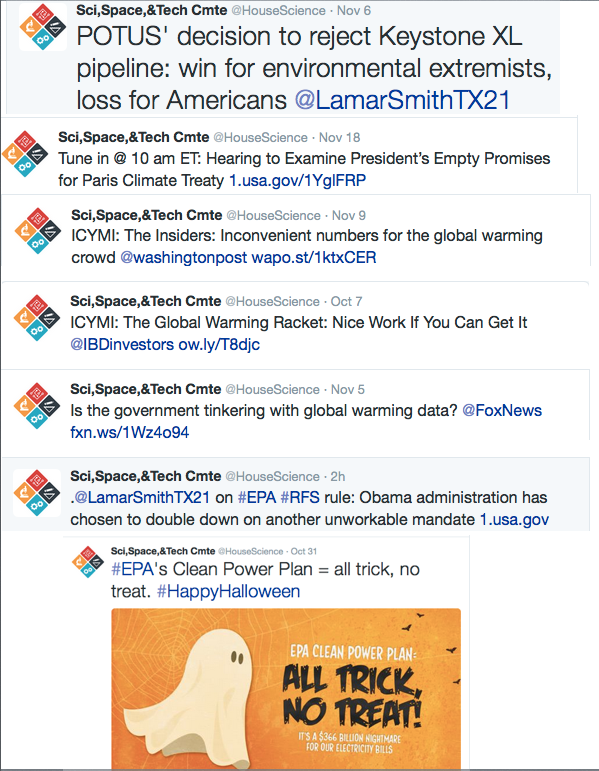 Yes, this is the same Committee skewered by Jon Stewart (starts at 2min:45sec):