Trump's Tower of Frauds and another startup scammer preying on protocols.io 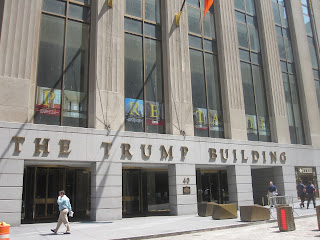 It seems that every few months, a new startup scam comes up on our radar. It's always someone claiming that they will make it easy for you to get millions for your startup if you just pay them a little bit first. I have written before about these pay-to-pitch schemes like the Keiretsu forum and have put together a guide to avoiding the scammers and parasites.

Still, one more timer-waster, Hanover International, managed to get fairly far, despite our experience and guard against these schemes. This was a group that was recommended to us by someone we trust, so we met with them. In the very first meeting, just to be certain I wouldn't be wasting my time, I told them that we don't participate in "pay-to-pitch" schemes and don't work with "introducers" who want a monthly fee for connecting to investors. I shared our above blog posts to nail in that point.

In response, I was assured that Hanover is legit and they don't do shady things like the terrible Keiretsu forum that charges $5,000-$10,000 for the honor of presenting to potential investors who won't invest in your startup. I searched for any scam reports on Hanover International, but unlike the countless hits for Keiretsu, found none. So, I went forward and had three different calls with a bunch of people from Hanover, including its founder Jim Hock. Jim stressed repeatedly that VCs are bloodsuckers who just want to enrich themselves, in contrast to Wall Street banks that invest for the good of the startup.

The line about Wall Street versus VCs sounded like total bullshit to me, and I wasn't too surprised when the product of our conversations was a proposal from Hanover to work with us towards getting a round from investment bankers, at the rate of $2,500/month plus equity. They required a minimum of 4 months of payments, which would be $10,000 - in fact twice as much as what the Keiretsu scammers tried to charge us. That's $10,000 of cash plus equity in the company for some preparatory work and introductions. Steep, especially considering that I reiterated multiple times prior to their proposal that under no circumstances would we pay any retainers or upfront cash.

I went back to Googling of Hanover International for complaints, and it caught my eye that searching for their "40 Wall Street" address brought me to SEC's, Public Alert: Unregistered Soliciting Entities (List of Unregistered Soliciting Entities That Have Been the Subject of Investor Complaints). Hanover itself wasn't on this list of fake companies, but their address was by far the most over-represented address on this list of fakes. This is the Trump Building, profiled by Bloomberg a few days ago as "Inside Trump’s Most Valuable Tower: Felons, Dictators and Girl Scouts" with this juicy segment:

“Iconic and wonderful,” Donald J. Trump said at a South Carolina town hall event last year, praising the 86-year-old Art Deco tower as one of his great possessions. The presumptive Republican presidential nominee also told fans in Maine that critics who mock his failed companies should focus instead on the Manhattan skyscraper. “They don’t want to talk about 40 Wall Street,” he said.

But the 72-story building has housed frauds, thieves, boiler rooms and penny-stock schemers since Trump took it over in 1995 in what may be the best deal of his career. No single property in his portfolio is more valuable than 40 Wall St., according to a Bloomberg valuation of his assets last year. And no U.S. address has been home to more of the unregistered brokerages that investors complain about, according to the Securities and Exchange Commission’s current public alert list.


Since my mother lives in New York, I asked her to stop by 40 Wall Street and check for Hanover. Yep, no sign of the company or Jim Hock anywhere in that building. I called Jim, confronted him, and he feebly attempted to come up with excuses. I then told him to stay away from us and wrote an angry e-mail to their entire group. The comical full exchange is below.

As I just expressed to Jim over the phone, we would like to disengage.

Frankly, I am surprised that it took this long with the phone calls and emails, wasting everyone's time. I was crystal clear in my first meeting with Michael on February 26 that we do not participate in pay-to-pitch arrangements. At the first meeting, I shared these blog posts with Michael:

Two weeks ago, over the phone, I was explicit that we would not be paying a retainer fee. Still, you sent the proposal asking to be paid thousands of dollars per month. In fact, we would pay you under that more than the $4,500 that Keiretsu asked to pitch their investors.

I am disappointed, to say the least.

Dear Lenny,
We are in receipt of your most recent email and we must disagree with your declarations.  We, as Hanover International provide advisory services including the preparation of marketing materials, PowerPoint presentations, and executive summary and enhanced business plan preparation and investor relations. In addition we position a company to be introduced to applicable investment banking houses based upon industry and capital requirements.

We had decided after your phone call  of stating that you could not pay our fees that we would go ahead on good faith and introduce you to selected investment banking houses. We, as a team have spent hours going through that process on your behalf and you have decided not to avail yourself of that process.

The proposal we sent to you was for discussion purposes only. It was not a contract.   In an email on March 30 you replied that it “looks good” in regards to document. Further, in that same email you suggested an alternative to our monthly fee. You asked would we consider receiving greater equity in a described protocol for our services.

We told you and re-iterated on conference calls with the members of the Hanover team that we do not work for “success fees” or commissions for capital raises as they are not in compliance with securities rules and regulations.

We ceased utilization of “executive offices” in New York at 40 Wall Street due to the fact that we were offered a better deal at 44 Wall Street and are moving there. The reason for the delay of this moving process is that Jim Hock has been dealing with serious medical issues and could not travel.

Finally, any claims about us that may be misinformed or irresponsible is both wrong and harmful and we will protect our reputation accordingly.

We sincerely wish you the best of luck and future success in all of your endeavors.

Thank you for the reply. You did not say or re-iterate on our calls that you are not a registered dealer/broker. I assume that is what you mean by saying that you "cannot do success fees".

If you think that what you are doing is fine, then so is the Keiretsu operation.

You tell me you "ceased" utilization, but Jim Hock told me this morning that you are there, just under a different name.

Your explanations simply confirm to me that I have wasted my time.